Simplicity was one of the things Michael Harrington and Evelyn Reid were looking for when they considered building a house in Admiral’s Cove. But they also wanted something personal that fit with who they were and what they wanted. Their only option, as they saw it, was to commission architect Robert Mellin to design their new home.

They visited other houses he had designed, walked around the plot of land the couple had purchased, and discussed what they wanted in a home.

“We were here a good three hours talking about what we wanted in our home, and what was important to us,” says Evelyn of their first of many site visits with Robert. “He really listened to all of that.” 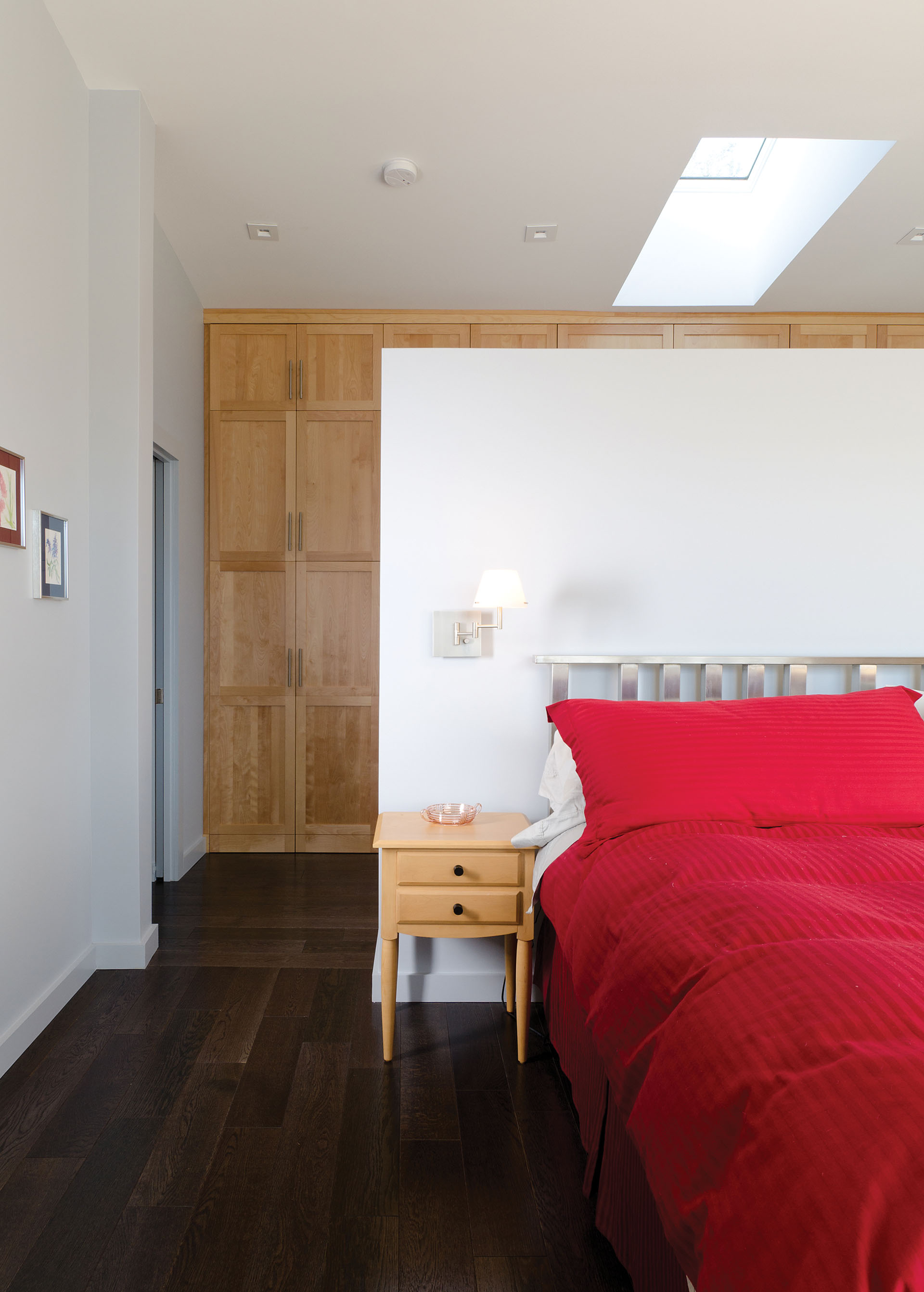 They discussed the desire for simplicity of design, which is reflected in the contemporary design of the house. There is no trim on any of the window casings, and the windows themselves don’t have any blinds or curtains. In the master bedroom, a barn-style door hangs on a rail and slides closed to block out light or close off the view.

Robert designed the house without closets, opting instead for walls lined with built-in cabinets in both the front entryway and master bedroom. The wall of cabinets is separated from the main bedroom space by a pony wall, creating an open dressing room area, with the bed backing onto the other side of the pony wall.

In the ensuite bathroom, it becomes evident that Michael and Evelyn put a lot of thought into their new home. Built as a retirement home, they realized there may come a time when they may require wheeled assistance. 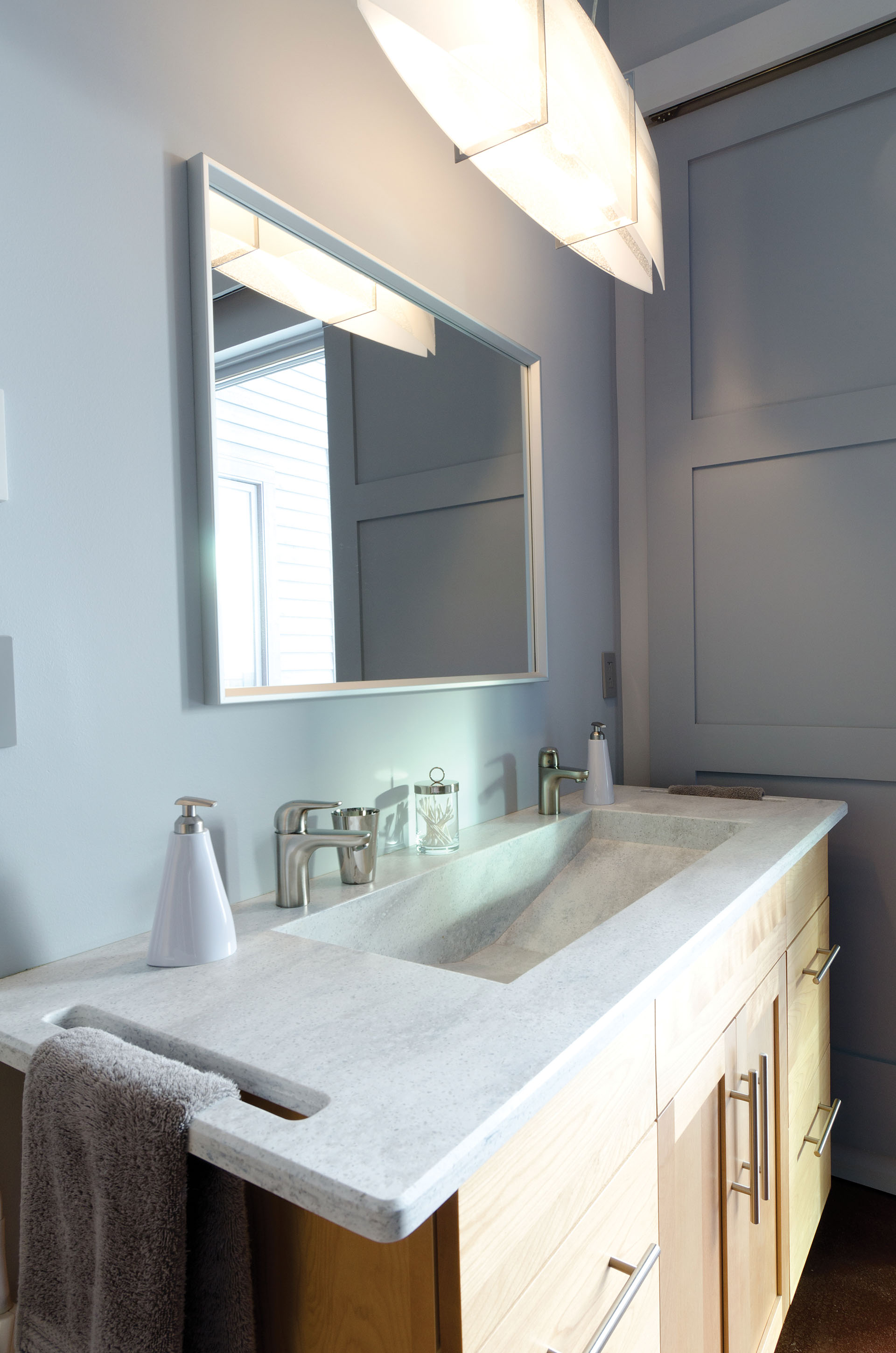 The walk-in shower has no barrier, making for a clean and contemporary look that evokes the feel of a wet-room style bathroom. The sink, a large slab of stone, is a custom design thought up by Michael and Evelyn. 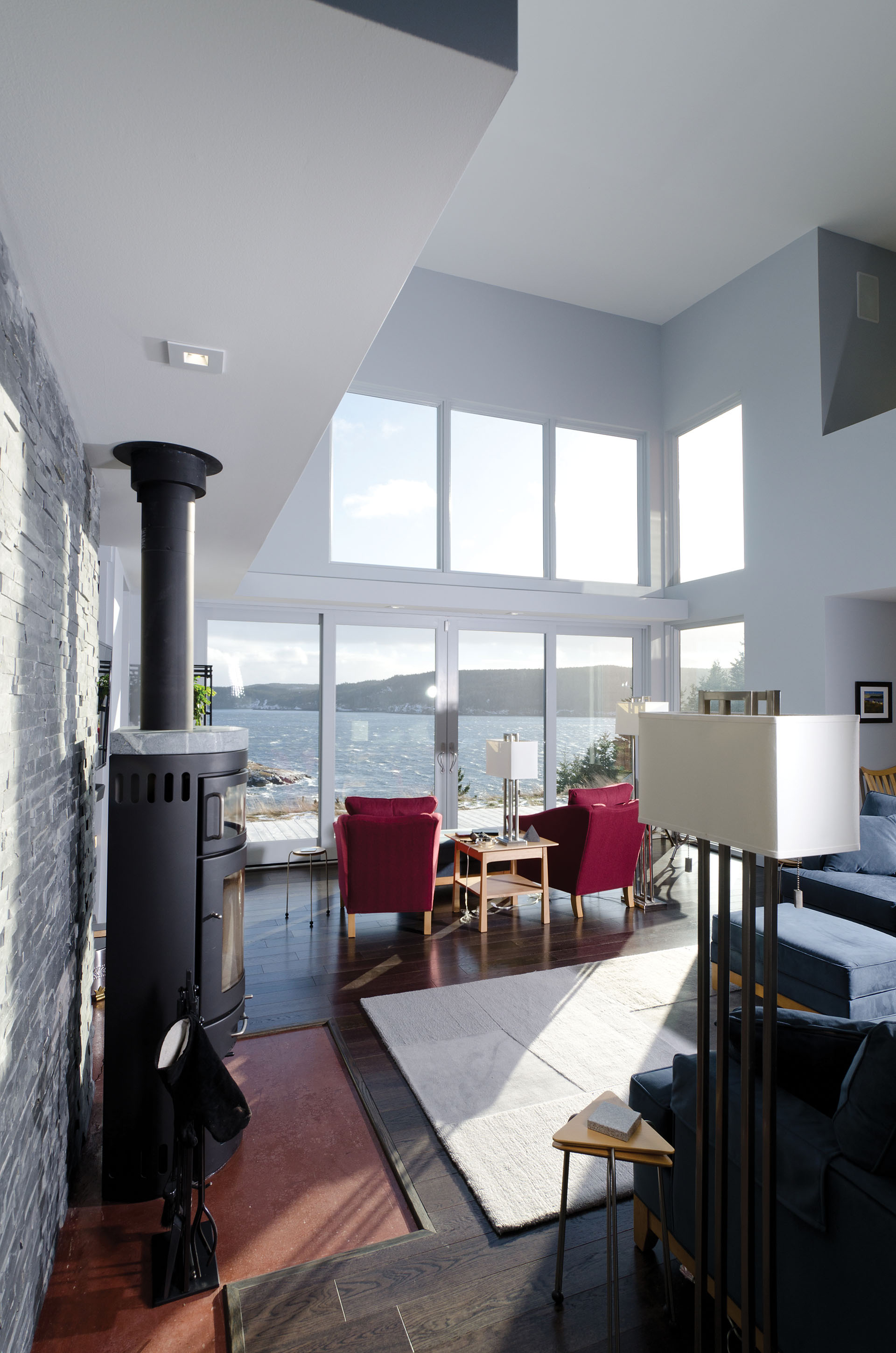 Careful attention was given to sight lines, both from the windows and throughout the house. From the bedroom, one can see through the house to the kitchen at the other end. A windbreak exterior wall provides shelter for the hot tub accessed off the bedroom, with a window-like opening that continues the through-house sight line to a view of close-growing spruce trees.

Having lived in homes with seldom-used rooms, such as formal dining and living rooms, Evelyn realized she no longer wanted rooms she didn’t use. She wanted “one room for eating and one room for sitting,” she says. The main living area is one large open concept space, where everything has a use and nothing exists purely for ceremony or formality.

The one place for eating is at a large dining table, with seating for eight, placed between the kitchen and living room spaces.

The one space for sitting is the living room, a space that mirrors the kitchen in both size and window configuration. The double-height ceilings have windows in both the upper and lower levels, providing plenty of natural light. The upper level windows also serve another purpose – they provide light for the second-floor guest bedrooms, which have window-like openings covered by sliding barn doors overlooking the main living space. 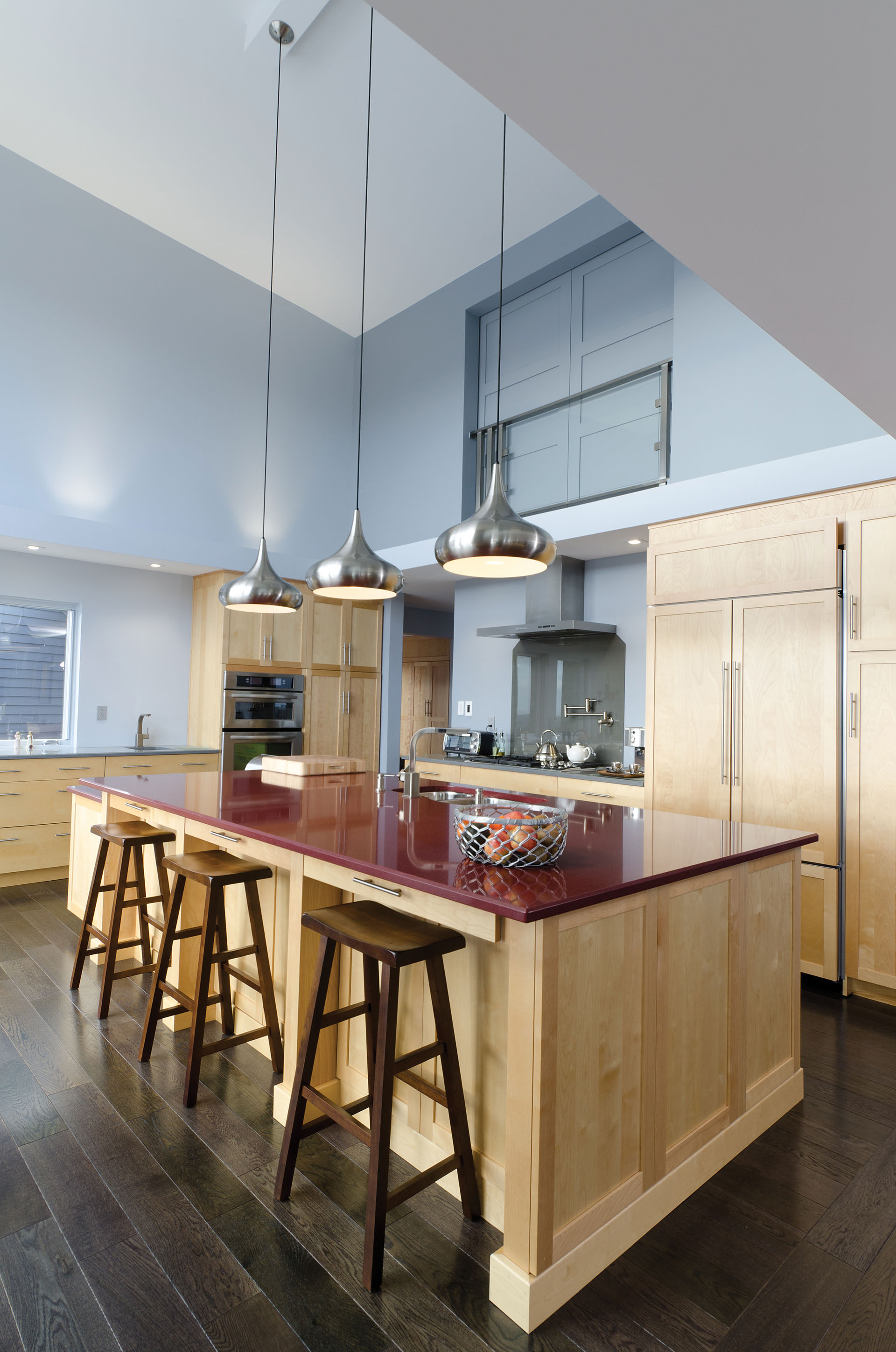 “All of my life I’ve been looking out my kitchen window at my neighbour’s kitchen window, and I sort of didn’t want that anymore,” says Evelyn, who now looks out her kitchen windows and sees the ocean and seaside of Admiral’s Cove. Her closest neighbour is at the bottom of the hill. 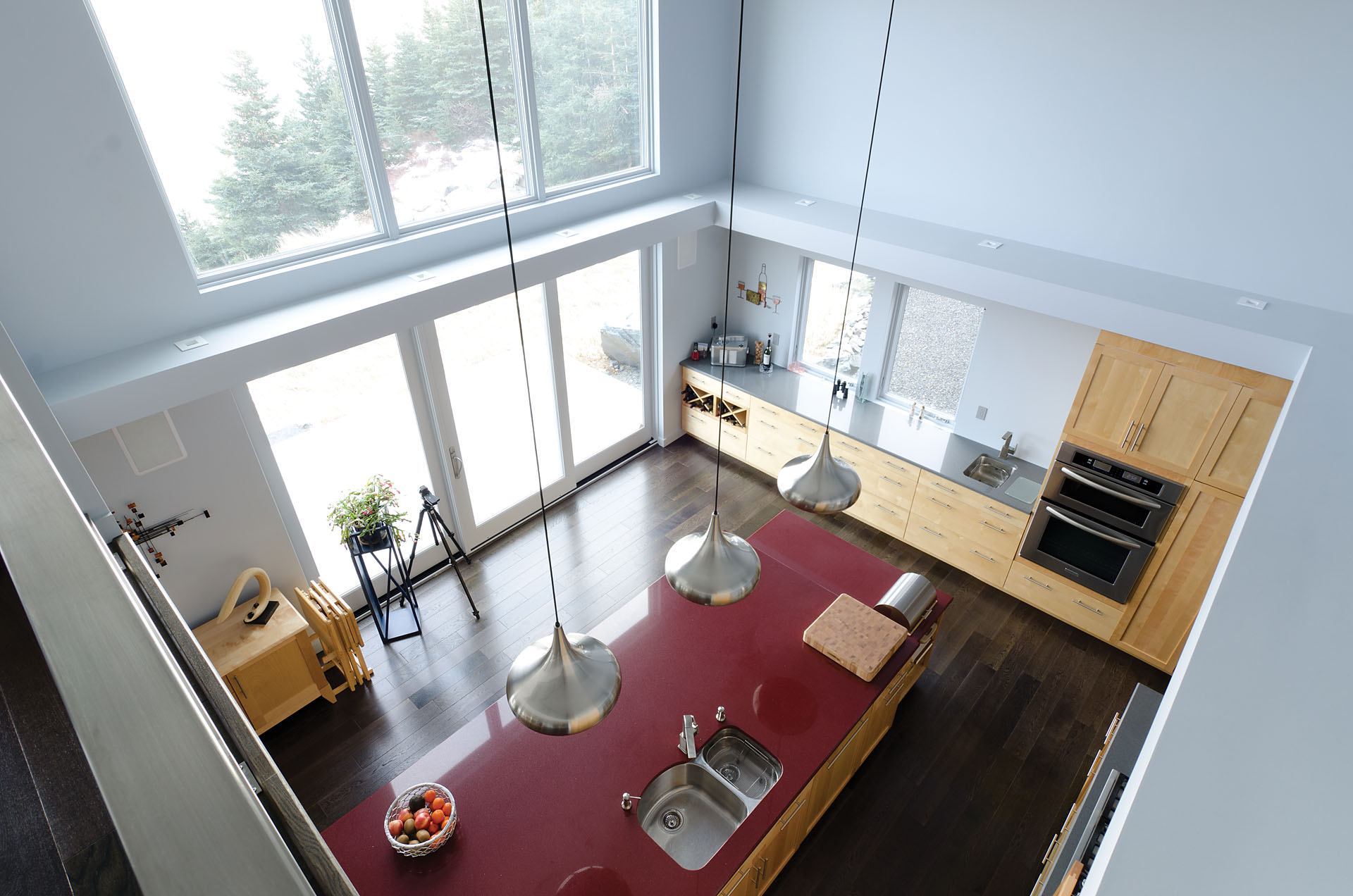 The house was designed with the view in mind, with double-height windows along the ocean-facing wall, and the house positioned to maximize both views and light.

Rather than shaping the land to fit the planned structure, this house was designed to fit the existing landscape. Placed on a flat bit of land on the side of a hill, the back of the house is close to a steep hill, while in front of the house the land quickly and steeply falls away. 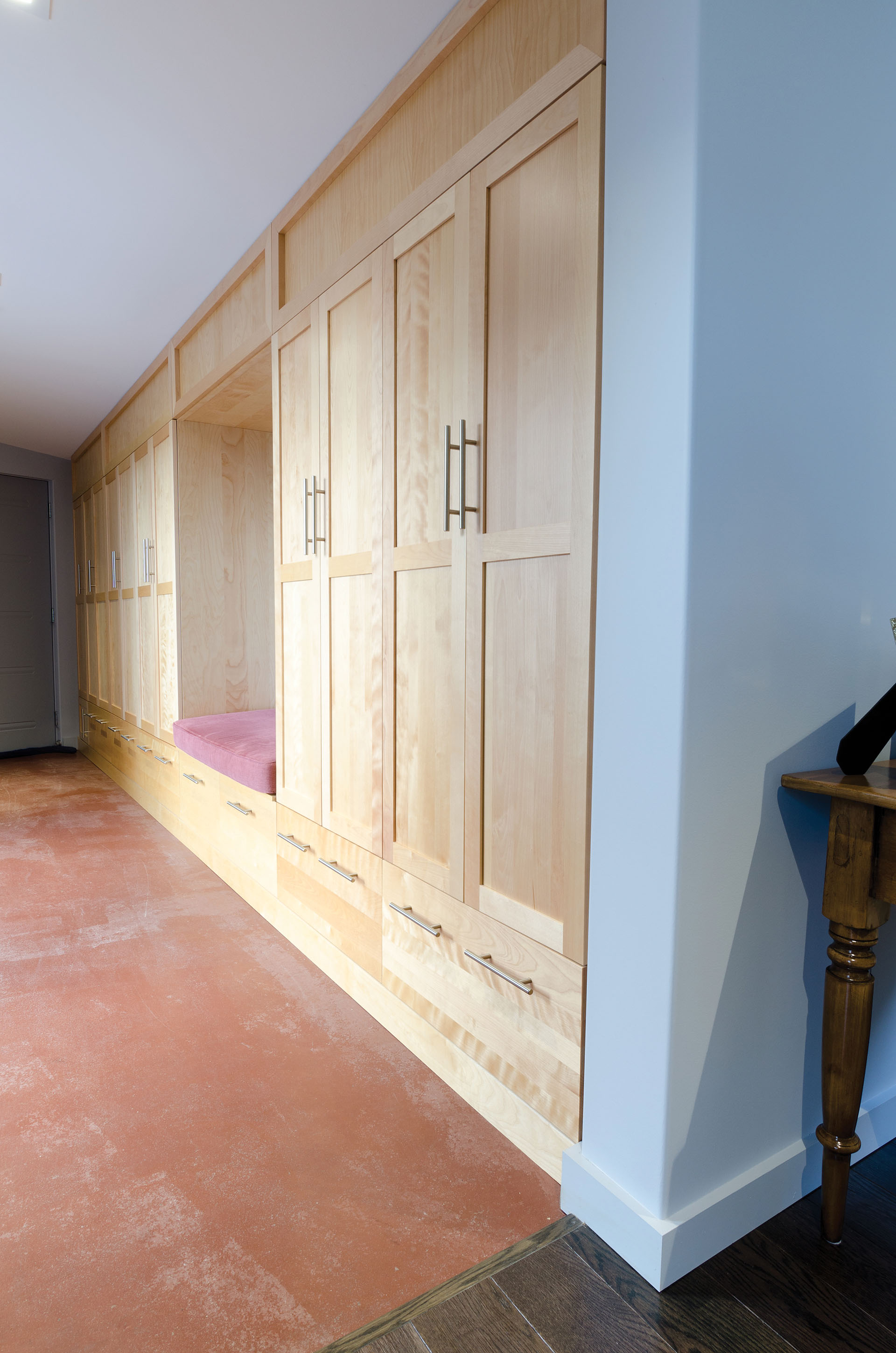 Conceptually, this is the house they always wanted, says Michael, although defining exactly what it was they wanted proved difficult. “It’s hard to say ‘I know exactly what I want,’ but I definitely know what I don’t want,” he says.

Their new home is the realization of that statement – a home that doesn’t have anything they did not want – like an excess of rooms – and only things they did want, based on a collaborative design process.

“It’s very comfortable, very easy to be in,” says Evelyn.

In his words: Architect Robert Mellin’s Thoughts On His Design

When I first visited the site, I saw there was an old cabin on the site. I also thought I saw what could have been traces of an old root cellar. I don’t know what the history was of this site, but it seems to me it was an ideal location for a homestead that would take advantage of the solar orientation, building against a hillside that offers protection from north winds. This is a similar situation as for houses in The Battery in St. John’s, and for Rockwell Kent’s house in Brigus. This is an ideal site for a house, with great views of the cove to the south and the ocean to the east.

For me, the most memorable aspect of Newfoundland’s rural vernacular architecture is the typical presence of many different types of outbuildings around the house. For my design of the Admiral’s Cove house, I wanted the visitor to the house to first enter a wind-protected courtyard of outbuildings, before reaching the house. These have different geometries and positioning from the main house, an informal arrangement that was influenced by the existing tree locations and the topography.

For this site, I thought it would make sense to design a house with linear geometry and a narrow profile in plan, on level one extending from the main garage to the west, to the foyer, then to the kitchen, dining and living areas, and then to the main bedroom, and finally to an outdoor hot tub next to the main bedroom. Circulation upon entering the house extends from the more public areas of the house to the west, to the most private area to the east (the main bedroom). The linear geometry permits every room in the house to have a view, and most of the rooms or areas also benefit from heat from the sun in winter. Accordingly, most of the windows are on the south side of the house. The kitchen, dining and living areas follow an open plan, with high and low ceiling height variations that permit guest bedrooms on the second floor to have a view out over the kitchen and living areas. The kitchen, dining and living areas are also spatially extended by a large exterior deck at the same level on the south side of the house.

This story was first published in the 2015 spring issue of Home & Cabin.